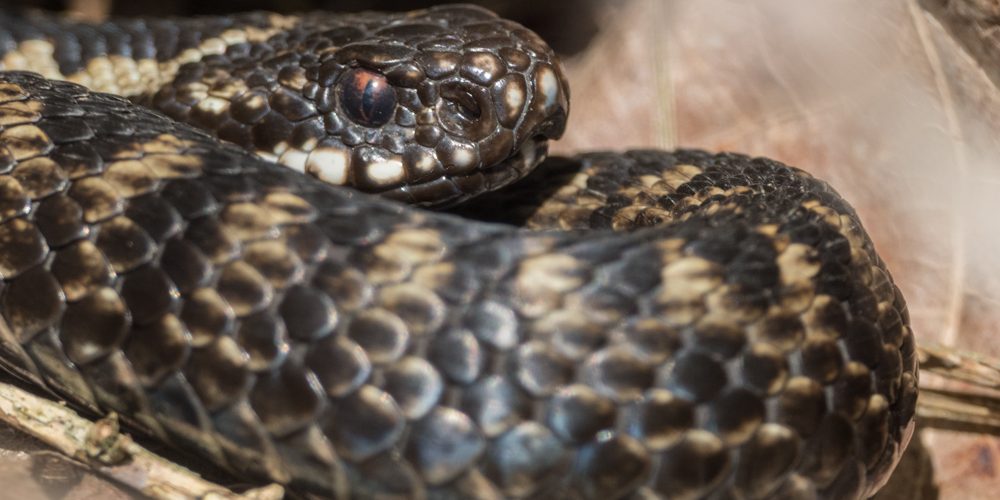 Back at the start of April I had a trip up to Fingeringhoe Wick to see the adders. Normally I would disclose the site for adders, but the fact they can be found here is well known and site well wardened and closed overnight.

I arrived a bit later than planned and the adders were already basking out in an area especially managed for them. This is a clearing near the path, with a low hedge separating the too. Here a male and female were basking at the edge of a small area of cover.

During early spring it is important to not disturb the adders as they need to warm up to prepare their bodies for breeding and are in a weakened state having not eaten all winter. All these photos were taken at a distance at a 840mm focal length equivalent and cropped.

A 3rd adder then turned up a few metres along from the clearing in a gap in the hedge, basking a patch of sunlight.

The male in the larger area soon warmed up to the point where he decided to wander off. Having already moulted his skin (as you can see from his grey colouration), he was probably off to look for a mate.

I sat on the path a safe distance away and observed it’s movements. Every so often it would move and put a different part of its body in the sun

But the views just got better, as it decided to slide right up to the edge of the path, 2 metres from at most.

I kept movement to a minimum and slowly got lower to the ground. These images are all crops, but what a privileged to get such a view of this wonderful animal.

The Olympus 300mm and 1.4x tele really are a great combo for this sort of work and the detail captured even in these crops is excellent.

As the sun continued to move round, the shadow of the hedge began to cover the adders basking area, so it moved along the edge of the path where I got a couple more shots, before leaving it to it.

A great encounter which I’ll remember for a long time!

One more thing before I wrap up this post:

There has been a lot of bad press recently about adders, with silly scaremongering stories about them hurting and killing people and dogs, but the truth is they are not really a danger to humans, as they tend to slide off the cover when they sense the the vibrations of us walking travelling through the ground. Dogs are in greater danger as they are more likely to get close to the adder, which in rare cases may strike the dog rather than retreat. This is easily avoided by simply keep the dog under control in areas with adders, which at this time of year will be full of nesting birds that could be disturbed by out of control dogs too.