Wall lizards and stoats, a day on the North Downs 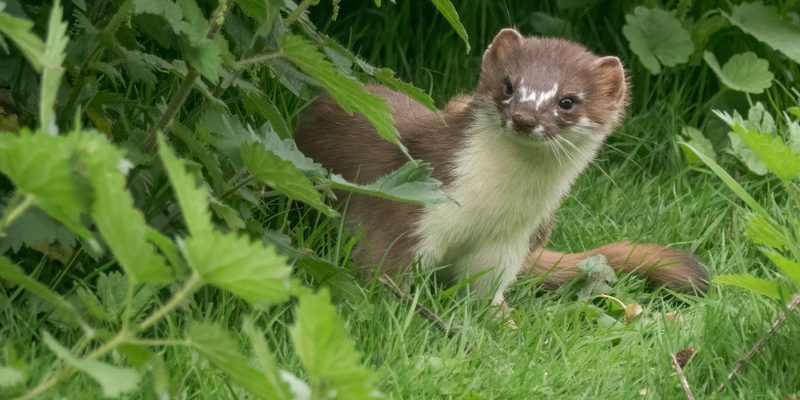 It’s been far too long since I’ve written a blog post, with the blog having basically taken over by the Podcast (which has also swallowed up any blog writing time. So here is a short write up of a day from last month.

I had to go to a village in the North Downs to sort out my wife’s car, and after dropping it off at the garage and a short walk I had lunch on a hill while waiting for it to have it MOT. It was cloudy and grey and I didn’t see much of note, other than a couple of buzzard calling at each other that took off from a nearby copse and then flew back. As you can see conditions for photography were not great!

This wren flew in front of me and posed a bit far away for a good shot.

The sun started to come out as I walked down the hill and I flush a large insect from the path. It may have just been a darter dragonfly but it had a hint of hornet robberfly about it. I sadly couldn’t relocate it though to find out.

Having picked up the car and left the garage I headed to a nearby church yard where I had heard there was wall lizards. The sun had been out a little while now but it was September and this species is Mediterranean in origin so I was worried they might not be out. As I approached the church there was large wall leading up to the entrance, made out of the flint nodules that often occur in the chalk that forms the North Downs. There, tucked under an overhang, was a juvenile wall lizard. A first for me!

It let me get close.

While trying to recompose, I felt something on my arm, the lizard had found a sunnier spot! I flinched and it quickly jumped off back to wall and tucked itself away.

I headed into the church yard and saw squirrel bound off under the shade of a large yew tree, but it seemed quite brown in colour, which I put down to the weird light in the shade of the tree…but, well, I’ll come to that. On the wall round the corner from the entrance wall, there was an adult wall lizard sat on the top.

And there was a 2nd one basking towards the base.

After taking some photos I walked around the whole site, but didn’t find much, other than this giant puffball fungus.

This blackbird sat on top of the wall and watched me intently.

Then I saw my squirrel again. Except it wasn’t a squirrel as it was bounding off more like a rat…no wait… ITS A STOAT! It had been so long since I’d seen one I had forgotten how big they could get. Unfortunately I have never had any luck with stoats or weasels. Despite working on a site with them for 10 years I rarely saw them and the one good opportunity to get a weasel I have had, I got distracted at a key moment and messed up the shot. The stoat ran off in tot bushes and I had missed another chance…gutted.

But I had time, so I thought I’d wait nearby. 5 minutes later a head poked round a grave stone!

I sat there for a short while, then headed back to cover. Then poked its head out again.

I moved back waited for a bit longer and a 2nd stoat appeared from a bed of nettles a few metres from the where I saw the first one.

I think there was a family group as I saw lots shooting past while I sat there for an hour, all too quick for a photo. A wonderful encounter and I’m chuffed to final have some half decent photos of a stoat. Just a weasel to get now….

While at the ‘wall lizard wall’ a dunnock sat up on a bramble bush behind and started singing.

After one more quick walk round there was time for one more look at the wall lizards.