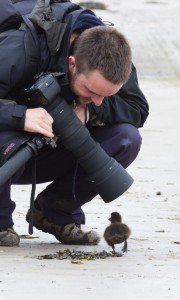 Although it is now almost a cliche to say it, I have been a fan of nature and wildlife since a young age.  In fact I can’t remember a time when I wasn’t!

My education involved studying ecological and palaeontological subjects to the BSc and MSc level and I have now ended up as an environmental education ranger in a country park, which is quite handy for a wildlife photographer.  I don’t have to wander far to take photos in my lunch break!

I have been trying to take photos of wildlife since I was a child, when I tried and failed to use a simple 35mm Boots film camera and ended up with tiny pink spots on some grass that should have been chaffinches!  In 2007 I purchased my first ‘real’ camera, a Panasonic Fz7 bridge camera, with which I learnt the basics of wildlife photography…. and got hooked!

Then in 2009, as soon as I saved up enough money, I bought my first DSLR: a Pentax k20d and a sigma 150-500mm lens and haven’t looked back.  I added more lenses and kit since and upgraded through the K5 and then the K3, but then a combination of the feeling the kit was holding me back and some terrible Pentax customer service made me jump to another brand.

I decided on Nikon, but then ended up buying Olympus!  I picked up a Oly EM1 mkii, 300mm F4 with teleconvertor and I haven’t looked back!

I have had some photos published and used by various conservation charities and they are now used in my wildlife talks.  My speciality, if I have one, is freshwater invertebrate photography, which I achieve using my photographic aquariums.  I you wish to use any of my photos, please contact me.

(Above photo by Jerry Hoare)

I currently shoot with the following

It is best to contact me on my email:
Neil_fal@yahoo.com

And I am on Facebook:
UK Wildlife
Pond Man