Four weeks ago I was having a conversion on Twitter with the Hawk and Owl Trust, about their plans to help with the hen harrier brood management plan.  I asked specifically about the Chairman’s plans to start the management in spring when they had said they would not start until persecution stops.  Sadly they have watered down their orginal requirements and after previous stating they would not be involved until persecution stops, they now only seem to require a strong commitment.  Below is a screen grab from the Contweets page showing the conversation. 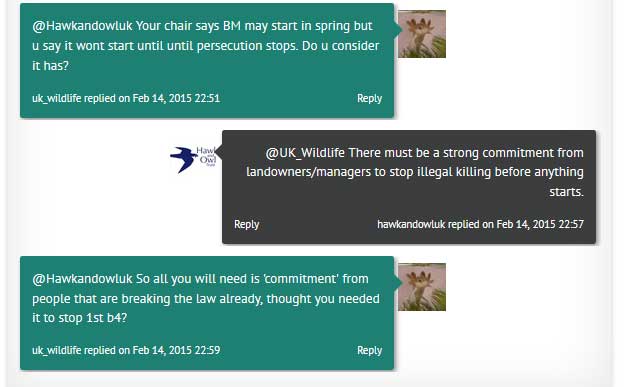 At this point I got a DM saying Hi Neil. It’s impossible to talk about such a complex issue like this on twitter. My number is xxxxxxxxxxxxx. Happy to talk to you in depth.  Iasked if I could email instead and did a few hours later:

As you may have gathered I am very concerned about your plans to assist/take part in the brood management of Hen Harriers. Up until now all the Conservation bodies have had a united front, but the decision to back hen harrier brood management by the Hawk and Owl Trust has now broken this and this has lead to many questions being asked

A number of questions have been asked by me and others I have summarised below.

1. One big question is why your stance on Brood Management has only recently become public. Why was this decision not made public (or at least publicised) for a year?

2. Do you not think members had a right to know earlier or was there a delay because were their concerns about how the news may be received?

3. You say there has been no change in policy, but the decison to change your stance on Brood Management, or at least publicly announce it has lead to your President, long term member and probably your most prominent supporter Chris Packham feeling he could no longer be any of these things, does this not concern you that you may have made the wrong decison?

4. It has be stated on Twitter and elsewhere that you will not be involved in and Hen Harrier Brood Management until persecution ends, but then your chairman Philip Merricks says that the Brood Management could start this spring. Is this correct and does this mean you believe persecution has ended?

5. On Twitter you stated: “There must be a strong commitment from landowners/managers to stop illegal killing before anything starts.” Does that mean you now only require a ‘commitment’ (what ever that means) from land owners not to kill Hen Harriers, and not and end to persecution as previously stated, to start involvement brood management?

7. It has been stated satellite tags will help prevent persecution, but tagged Hen and Montagu’s harriers signals have disappeared over grouse moors/estates and the tags have done nothing to protect them or even lead to any prosecutions for illegal killing, so how exactly would tagging help in this case?

8. Why have you agreed to the demands of the hunting lobby to carry out brood management rather than support initiatives such as vicarious liability (which would force land owners to not break existing protection laws) or even diversionary feeding?

9. You say you have not ‘switched sides’ or ‘got in bed’ with the hunting lobby, but can you understand peoples eyebrows being raised when after you agree to what the hunting lobby wants and loose one of the most vocal campaigners against hen harrier persecution as a president, only to then get a donation from the head of a prominent landowners association?

10. After a year which included attacks and complaints to the charity commission on the RSPB by the ‘You Forgot About the Birds’ and the Countryside Alliance and in which many groups that support hunting complaining charities like the RSPB and Wildlife Trust are to powerful, are you not concerned that by taking this stance you may be undermining the hard work done by these charities to protect hen harriers and other wildlife?

Thank you for taking the time to answer these questions.

As many people seem to want to know the answers to these questions, would it be OK if I put these replies on my blog?

Despite sending the email again and a number of ‘nudges’ on twitter DMs I am yet to receive a response…..