Fox attack stories and the numbers I came home yesterday evening to see the fox bites off babies finger story all over the net, followed by Boris Johnson’s call for councils to do more about this ‘the growing problem of urban foxes’ which are a ‘a pest and a menace, particularly in our cities.’  Interesting that his party (The Conservatives for those who are unaware) are trying to repeal a ban on fox hunting with dogs and this story comes after David Cameron admitted there was not enough support to bring back fox hunting with dogs. I’m not saying this all a set up, but I certainly expect foxes to get more bad PR from this government and certain elements of the press who support the hunting ban being repealed.

There was a spate of these fox attacking humans stories in 2010, after 2 twins were reportedly attacked in their bedroom.

There were also the following stories afterwards:

Fox bites woman’s ear as she sleeps
Woman tells of horror at being bitten by a fox on two separate nights
Parents of toddler bitten by fox describe ‘brave little boy
Angler scarred for life by a FOX when it bit his face while he lay asleep in tent
In 2010 there was even this story of a Judges shoes being eaten by a fox!‘

There have been other stories since 2010 too including:
Fox bites off woman’s finger (slight exaggeration in this one, see the photo)
And recently Terror as fox bites toddler, 3, on sledge and tries to drag him away

All this perhaps looks pretty bad. However this needs be put in perspective. Research by DEFRA reports 250,000 dog bites occurring each year in the UK.

The three most common causes of bites are:

Further down it reports:

It is hard to estimate how common bites are as records are usually only kept of bites that were serious enough to require hospital treatment; which in England is around 6,000 cases of dog bites and 2,500 cases due to other bites, including human.

If we take the total bites as 8500, the 6000 dog bites actually work out as around 70% of this, probably due to rounding up for simplicity, using ‘4 out of 5’ to illustrate numbers. This leaves 2500 ‘other bites’ which adds up to around 30%, which doesn’t match with the above 15% by cats and 5% by humans. So to keep things simple I’ll take the cats bites as 15% of 8500 which is 1875 and human bites as 5% of 8500 which is 625. We can add in the estimated 100 bites a year by adders too. If we take all the fox stories in 2010 (5) and assume all are accurate, and due to the fuss after the twins were attacked, all the attacks were reported (which based on the fact shoe story was reported they probably were) and double this figure, as they pretty much all took place in the last 6 months of 2010, that gives us 10 fox attacks a year.

If put this all this data together we can get this chart: 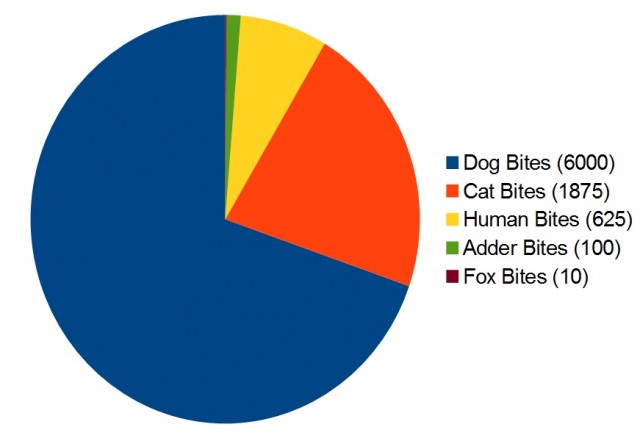