If you follow me on Facebook or Twitter you probably know by now that I had an image Highly Commended in the British Wildlife Photography Awards this year, a rather special moment for me as its the first tike I’ve had any real success in a national competition, having only been shortlisted the last two years.  The photo that got highly commended in the (Urban wildlife category) was this one, ‘fox in a bin.’ 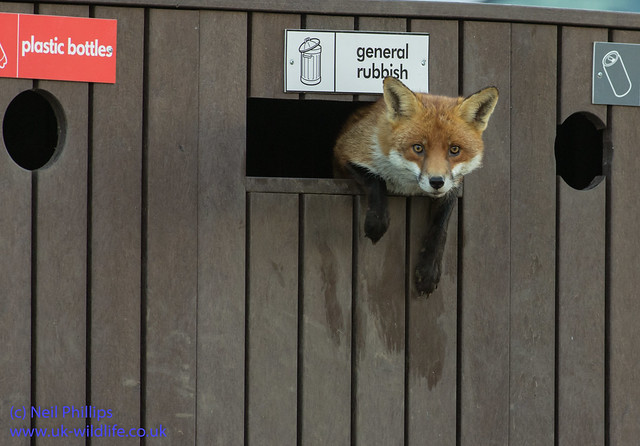 As a result of this I was invited to the award evening along with all the winners and other commended photographers and met some photographers who work I have admired online (and elsewhere), some of which I had chatted to on Twitter, Flickr, Facebook and the like.  On arriving we were directed into the gallery and  it was great to meet the photographers I’d spoken online to in person, along with some (equally great) photographers I’d not encountered before.  I was also happy to see my good friend Dave Pressland (who was highly commended in the close to nature category), and Julian, a fellow member of the Langdon Wildlife Photography club had got highly commended in the plant category.

After we had some time to look around the exhibition, we were all directed into the main room where Chris Packham announced the winners of various categories and he was on fine form, with jokes a quips regarding pandas, his critiquing of photos, stories of a pet fox sticking its tongue up his nose and not being a big fan of dormice.  He also made some important serious points, especially regarding the badger cull and how we need to continue the opposition to it, even though everything has been said time and again to a government ignorant to the science and he lead an applause for those fighting the cull.  Some great photos were shown, the two youth category winners were better than any photo I’ve taken and all the winners were in my view well deserved.  You can see the winners on the BWPA website here.

After the awards ceremony, Chris patiently signed pretty much everyone’s book and the hall started to empty, I found my friend Dave (who had first in the queue to get his booked signed!) and he introduced me to Jules Cox, in my opinion one of the best wildlife photographers there is and it was great to chat to him.    Me and Julian took the opportunity to have a good look at the exhibition with the rooms pretty much to ourselves and there were quite a few I’d be happy to have on my wall.

Before leaving I took the chance to have a chat with Chris Packham, discussing the fox ‘attack’ stories that appear to periodically rear their ugly head, shared our dismay at the current ‘greenest ever’ government’s record, including the awful infrastructure bill of which part may stop the reintroduction of the beaver and allow the shooting of reintroduced red kites and sea eagles, and discussed the recent ‘crafty’ behaviour of the GWCT and the fact their representative at the previous nights ‘Controversial conservation’ conference avoided answering his questions.  All in all he is a top bloke and I’m glad there is someone like him in his position, willing to stick his neck out to help bring attention to the plight of our wildlife.

It was a great evening, so thanks to all those involved in organising the event and competition.  It was great to meet everyone: Ben Andrews, Craig Churchill, Kate ‘wildlfe Kate’ Macrae, and everyone else.   In fact it was so good Julian and I were so busy discussing it and the our favourite photographs that we missed our Tube stop on the way home and had to go back on ourselves – by 2 stops!