A tale of tadpoles and fairies 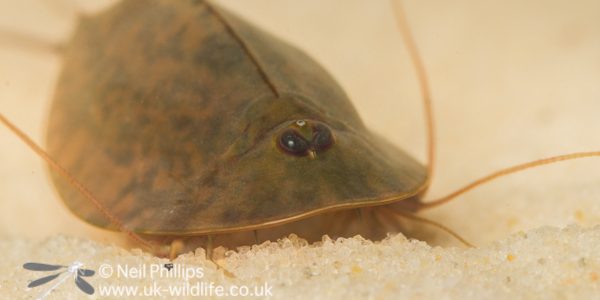 A couple of years ago I was fortunate enough to be introduced to Naomi Ewald, who is an expert on all thing freshwater in the New Forest and works for the Freshwater Habitats Trust. Last year she was kind enough to take me to a pond full of medicinal leeches and to a pond to look for tadpole shrimps, where we found some fairy shrimp naupli, but no adults and no tadpole shrimps. Sadly the conditions that year were not right for them to hatch.

This year however there was sufficient rain in August, when temperatures were still high enough for the eggs to hatch, that some appeared in the pond. This pond is the only pond in England and, other than a small group of ponds in Scotland, the only pond in the UK that is home to tadpole shrimps Triops cancriformis. So to see these amazing species, I headed back down to the New Forest to meet up with Naomi (who has the relevant Schedule 5 license). It was a good hour or two of looking by both of us by the time Naomi had found one, but what a wonderful little thing. 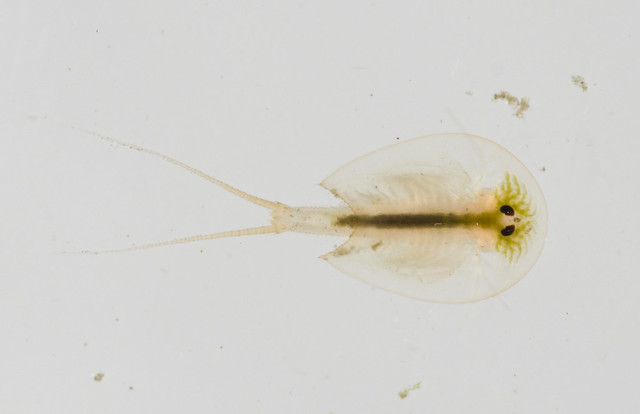 It was only a youngster, little over 1cm long with no pigment in its carapace yet.

A bit later we had a larger individual about 3 or 4cm long, still no where near full size but showing adult colouration. 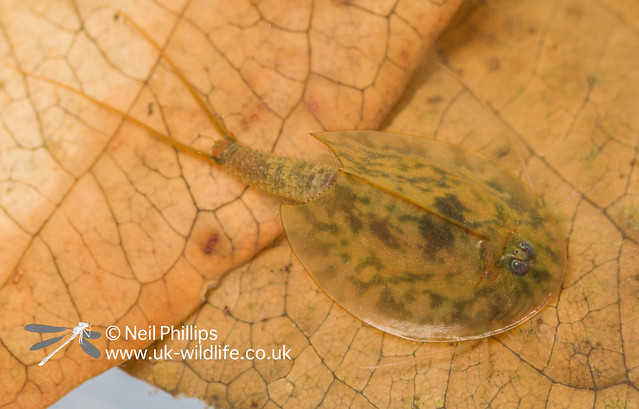 The underside is rather reminiscent to a facehugger from Alien! 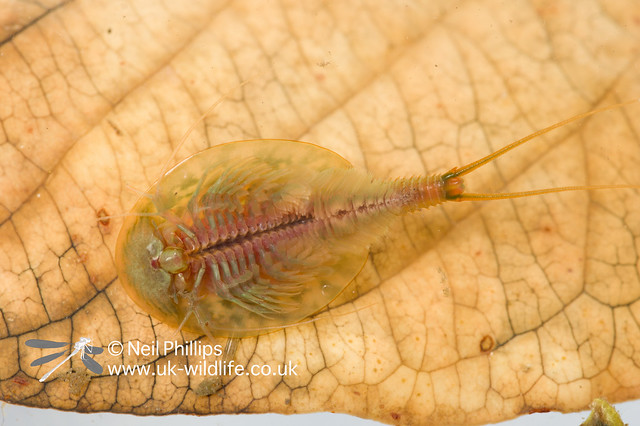 Reminds me of a horseshoe crab more than a little too.

It wasn’t just Tadpole shrimps though, there were fairy shrimps (Chirocephalus diaphanus) again, but this time they were 3 to 4cm long adults. 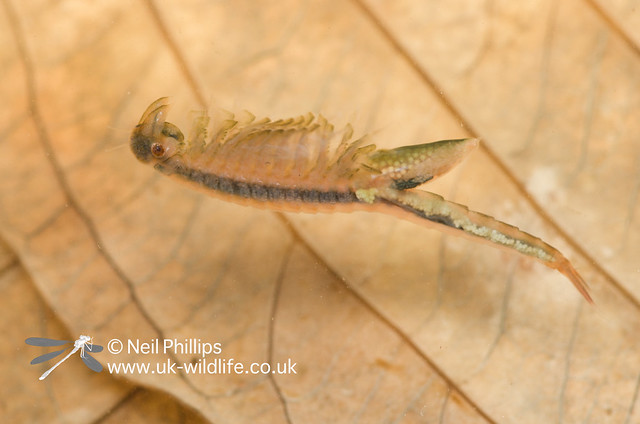 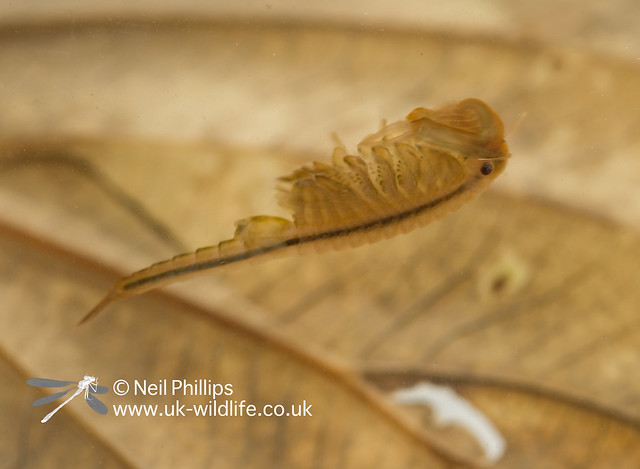 It was an excellent day and the weather held out long enough, with Naomi demonstrating her patience of a saint, not only in finding these wonderful crustaceans, but waiting for hours as I tried to photograph them in an aquarium outside in the sun, which is surprisingly difficult to do without getting reflections etc!

It was so good in fact I was back again for more a few weeks later. On my first viist I broke out my Ricoh Wg-4 waterproof compact to try to film fairy shrimps, but as I was focusing my time on getting tadpole shrimp photos, I failed to get any decent footage. So this time I started off trying to film fairy shrimps. I got some footage, but also came across my first in situ tadpole shrimp, and it was a big 8cm long adult! My friend Simon had joined us at this point so there were at least 2 people to witness the gleeful noise I emitted! It was fantastic to finally see one in the wild, a species I ahd read about as a child in the ‘Bugs’ series of magazines, which showed them in a desert pool. I had no idea then that they were in the UK, let alone down the road from somewhere I had stay as a child in the New Forest! Later when I found them in a book on British freshwater life, they went right to the top of my ‘must see list.’

Here is the long cut of the underwater footage I shot of both species. I believe it is the first footage of these 2 species of them actually in their habitat:

I brought with me a square aquarium with sand in, which unfortunately clouded the water a bit, but enabled me to get some nice close ups of one of the bigger specimens we found.

You can see the third eye between the main two that gives rise to the Tri-ops genus name. 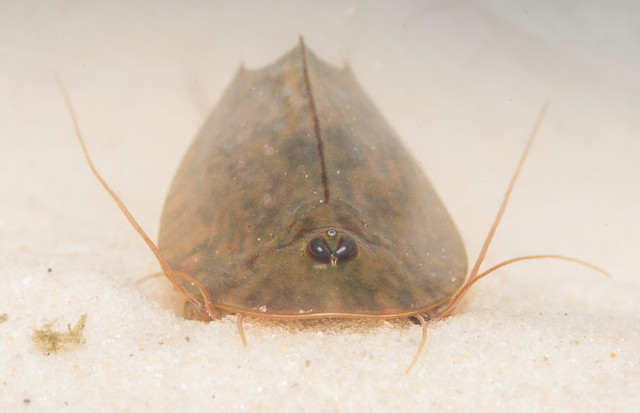 They are a very ancient lineage, with fossils of very similar animals going back 200 million years, and some identified as the same species going back over 100 million years! Obviously despite their rarity (in the UK), a very successful and long lived design! 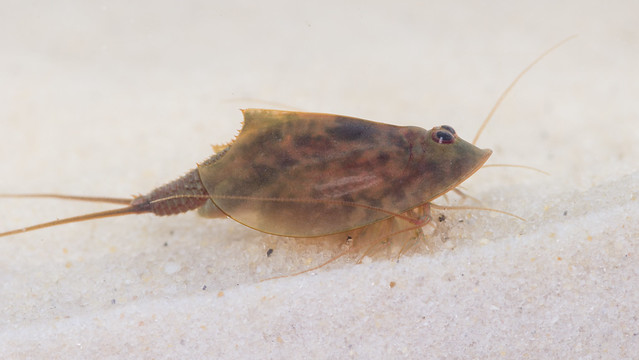 I got another view of the horsehoe crab like underside.

She even decided to lay some eggs. On the subject of egg laying, all the individuals in the UK (and the Northern hemisphere) are asexual females, laying eggs without mating.

These eggs are very tough. Being specialist of seasonal/temporary pools, the eggs can resist drying out and only hatch when the temperature is warm enough and the water in the pond is only the result fresh rainfall, to ensure the pond is empty of most competition and predators. The eggs can survive for over 100 years in the soil, waiting for the right conditions to hatch. 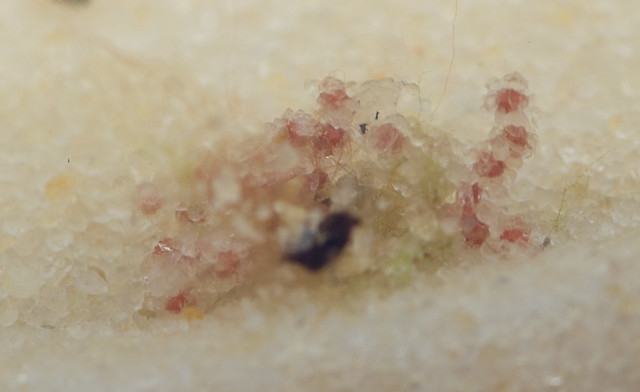 I got some more fairy shrimp photos on my second visit too. 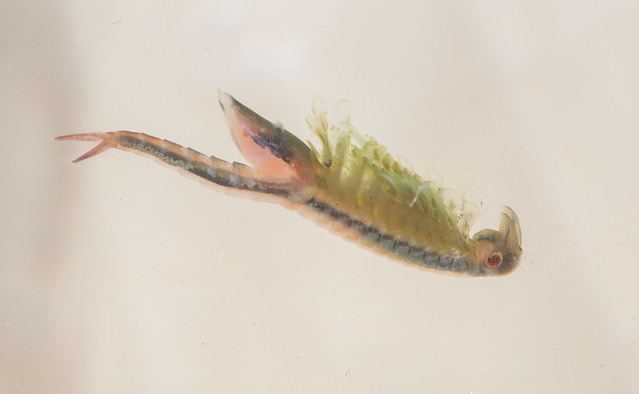 This species is also a specialist of temporary pools with drought resistant eggs, but seem to not be as picky on the conditions as it is found elsewhere in the Forest and UK, but is still very rare. It will also hatch at much lower temperatures. 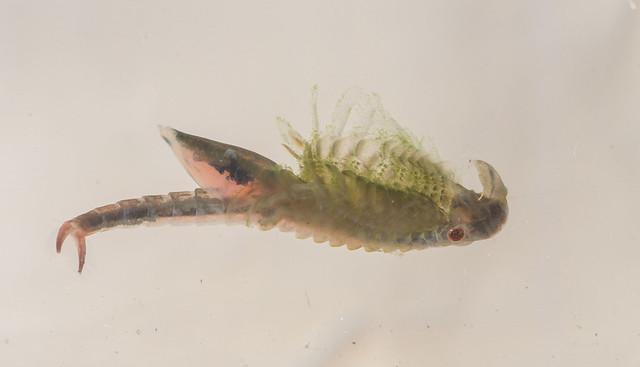 All in all the wildlife highlight of the year (well joint 1st with see fen raft spiders – more on them another time).

There is more on the amazing ponds in the New Forest on the Freshwater Habitats Trust blog , an amazing organisation sticking up for and help to conserve the often forgotten freshwater life in the UK,