A day in South Essex

You are here:
CanveyEssexgrasshopperheteropterahymenopterainsectodonataspiderswat tyler cp 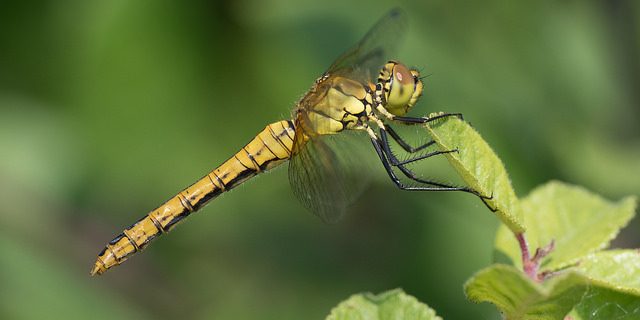 Living in South Essex I often look with green eyes at those in places like the highlands with pine martens and crested tit in the wilderness on their doorstep or in Norfolk with swallowtail butterflies and large areas of fen to explore, but looking objectively there are some good things to be found in Essex, particularly if you are looking at invertebrates.

A couple of weeks ago I had a mini tour around some South Essex sites. I started at Wat Tyler CP, an SSSI and country park. It was only just gone 8, but already getting rather hot. This squirrel scampered across the very dry looking cottage meadow. 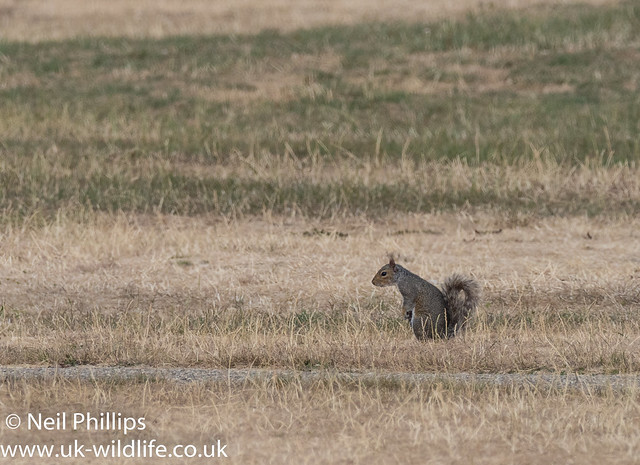 In a s=more shaded area, this robin ticked at me from the path. 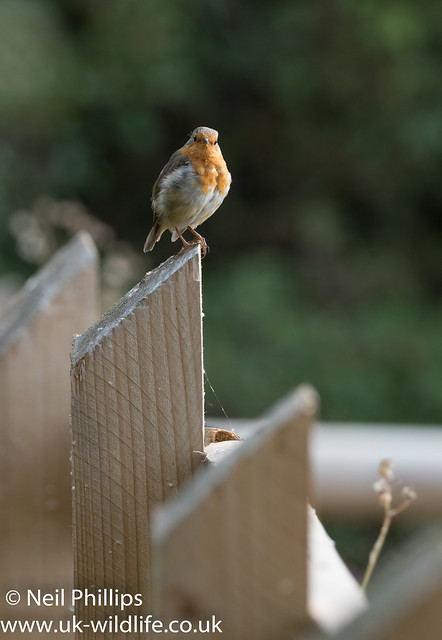 There were a few butterflies on the wing too, but the lack of water and heat seemed to be having a negative impact on the amount of wildlife to be seen.

After a morning of work I headed down the A13 to Canvey Wick. This brownfield site was the first nature reserve of its kind, its diverse invertebrate fauna thankfully (mostly) saved from development. I was here to meet the natural history author Stephen Moss and have a look for some rare inverts.

Not particularly rare in Essex but uncommon or absent from some areas of the UK, this ruddy darter dragonfly was a nice start as it was not species Stephen had seen often. 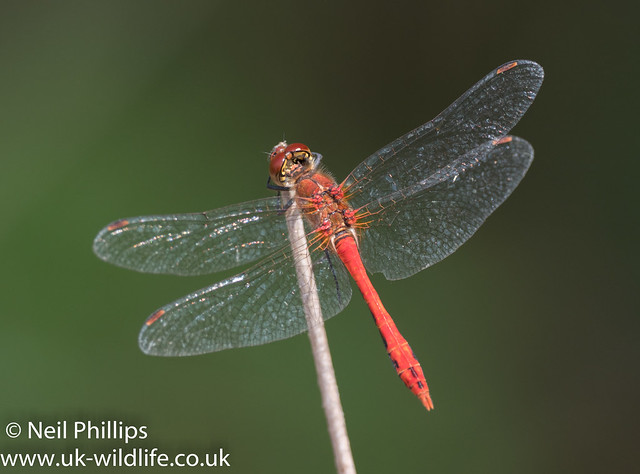 A second individual posed backlit on this branch. 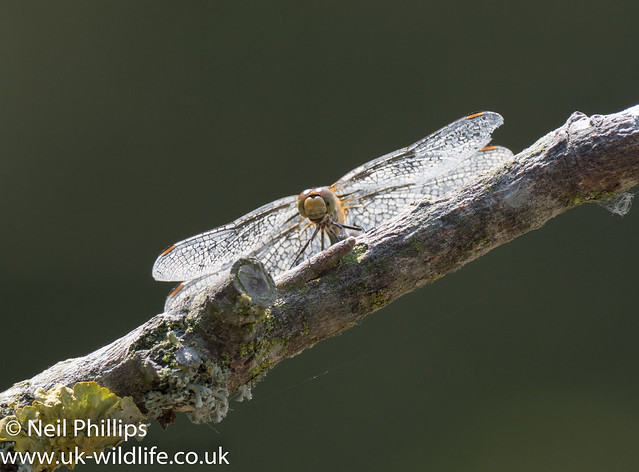 A bit further along the path this migrant hawker hung in shade of a bush, the heat seemingly too much even for these sun loving insects. 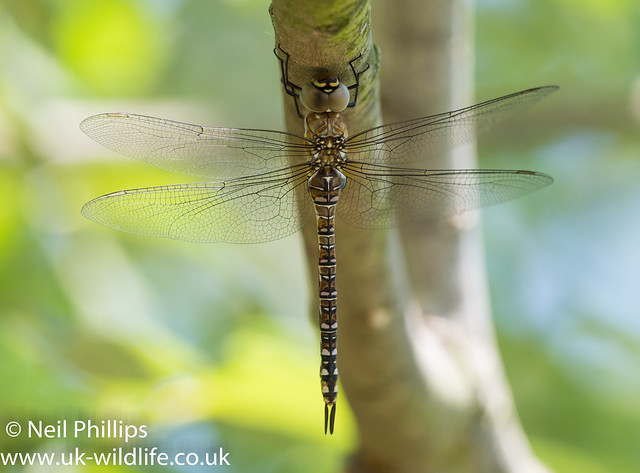 We looked around a sand mound for some beewolfs, but instead found this clouded yellow butterfly. 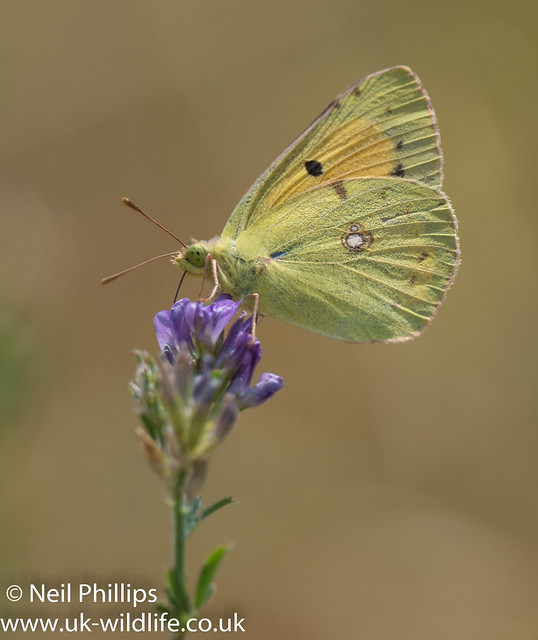 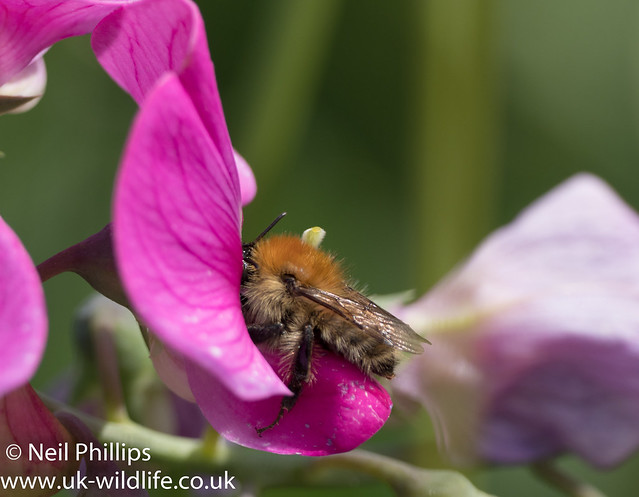 It was feeding on a garden escapee plant, a sweet pea, one of the few flowers that were still alive after the long dry spell.

There were loads of labyrinth spider with their large horizontal webs (some over 50cm across!) with a tube at the end where the spider sits and waits for its prey. One ventured out when a grasshopper landed in her web. 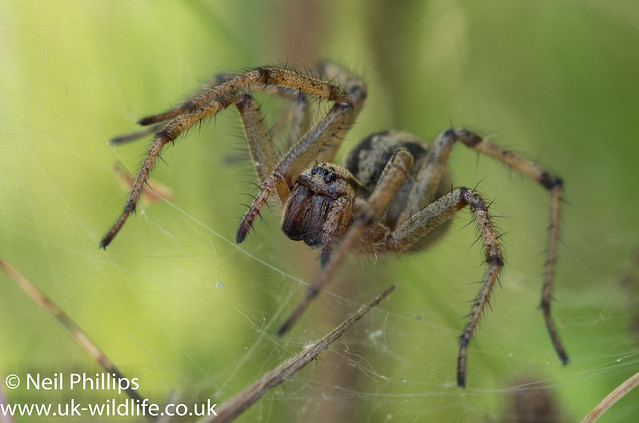 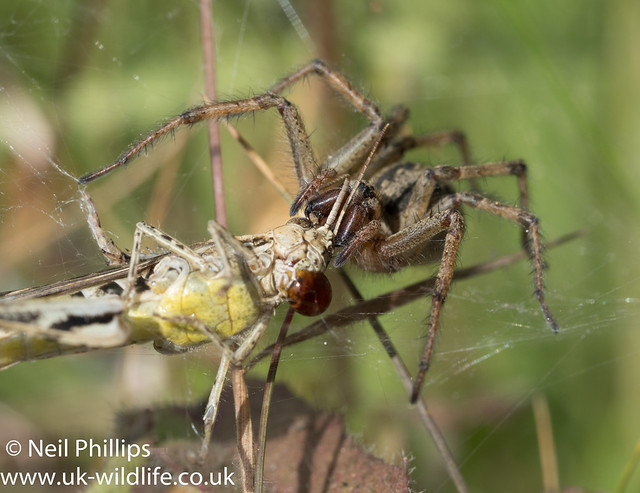 She was briefly distracted by what looks like some type of damselbug. 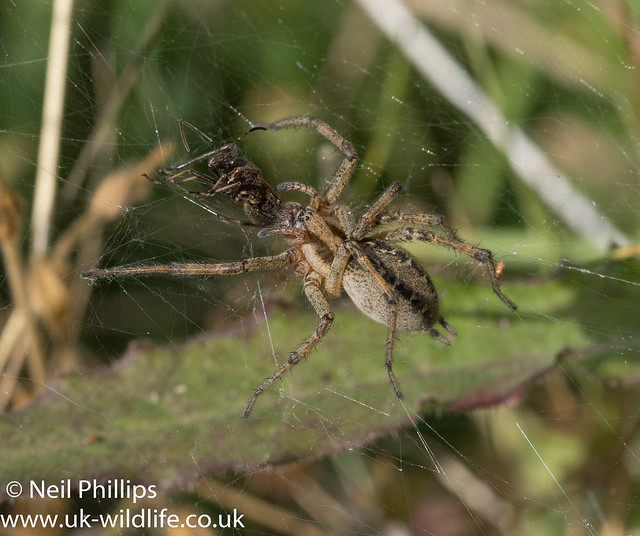 We saw some beewolfs and other solitary wasps on a sand bank too but it was much too warm and they were far too active to photograph.
Stephen spotted this brown argus which posed on a flower. 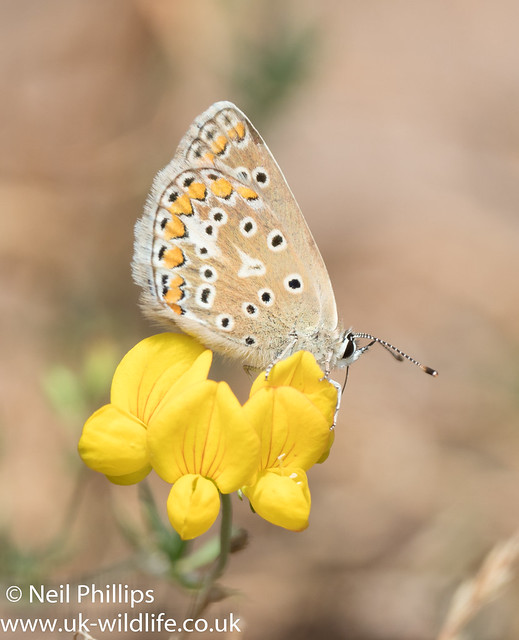 We popped into another site on Canvey before we left the island to look for some southern emerald damselflies, but the strong winds made this impossible. I did manage 1 good shot of a southern migrant hawker in the few minutes spent near their ditch. 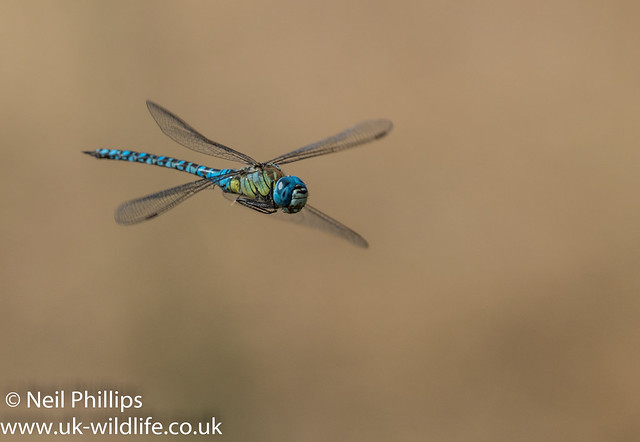 Our last stop was a site near East Tilbury. There had obviously been a recent emergence of comma butterflies and some posed nicely. 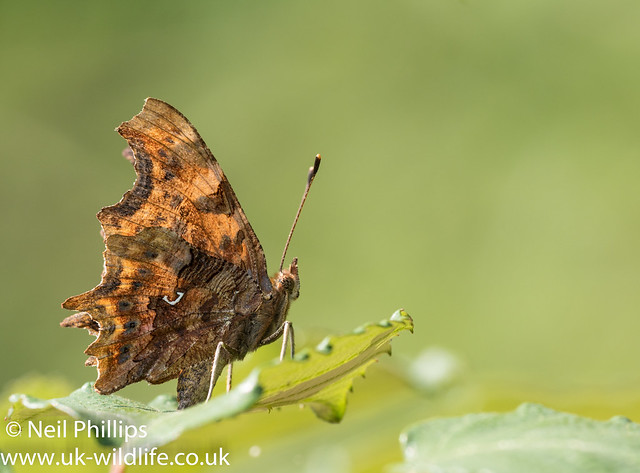 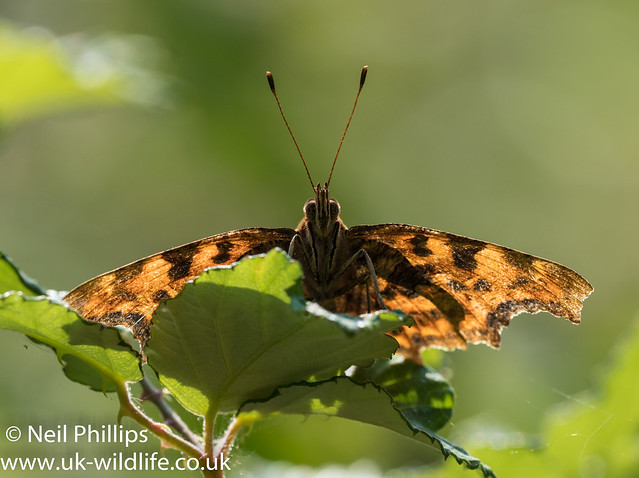 We were looking for willow emerald damselflies with no luck. We did find a wall brown butterfly and lots of gatekeepers on the bramble. 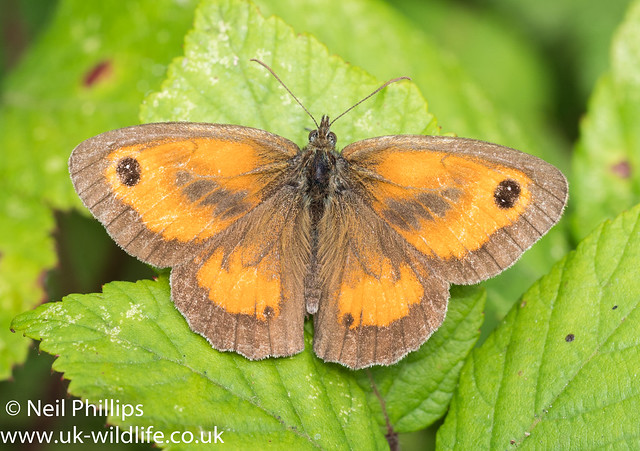 Then as we were leaving I spotted a damselfly right next the path where I was walking. A willow emerald! 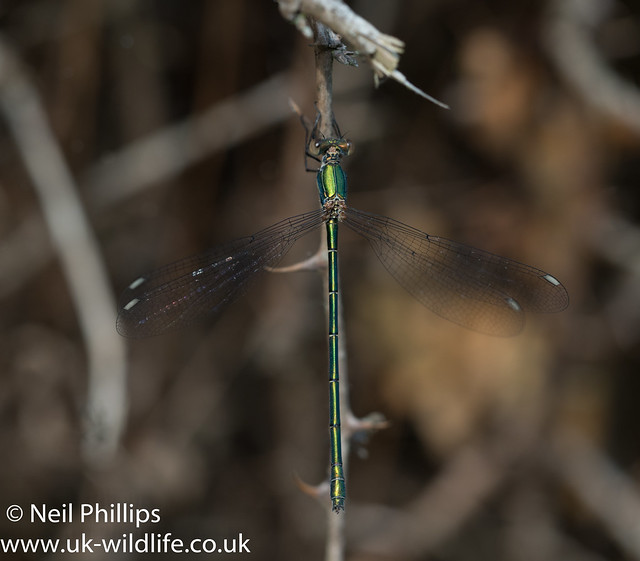 A first for Stephen and my first of the year.

To finish of a nice day, this brown argus posed on a grass stem. 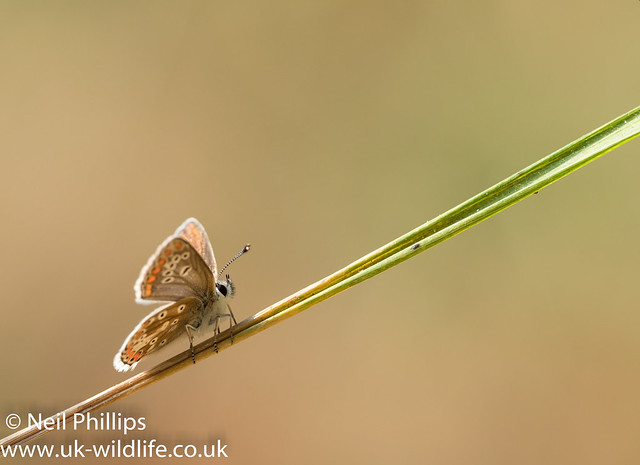 So South Essex is pretty good after all.