A few years ago on my old blog I posted a diagram to show the emergence and flight times of all the British odonata (dragonflies and damselflies) and a seemed to be quite popular. Since then a number of new species have become established in Britain, or are at least well on their way to being so. So I decided to make a new version and added the new species. Once again I used Smallshire and Walsh (2004) as the base source of this information, but I have now added data for the following new species: southern migrant (blue eyed) hawker Aeshna affinis, red veined darter Sympetrum fonscolombii, willow emerald damselfly Lestes viridis, southern emerald damselfly Lestes barbarus and dainty damselfly Coenagrion scitulum.  The data for these is from my own observations and from other’s on the British dragonfly society‘s ‘Hot News’ page. 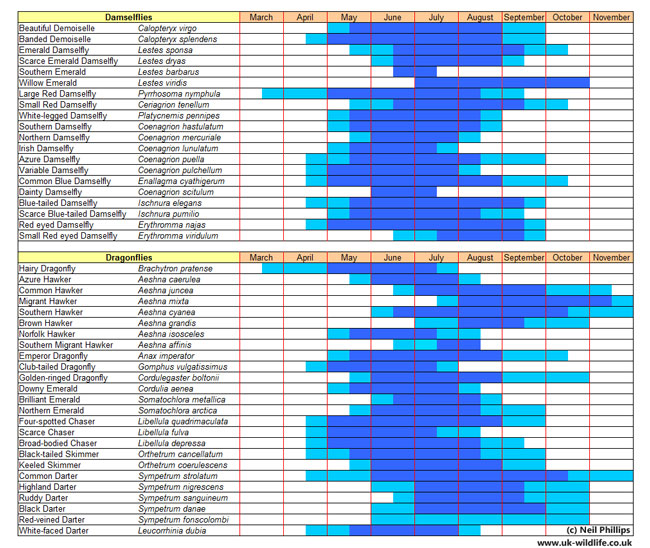 The table itself should be used as a guide, rather than an exact calendar, since dragonfly emergence and flight times vary due to weather and where you are in the UK, with emergence times tending to be later the further north you are.  Other factors can affect emergence times too, with milder winters and warmer springs leading to early emergence and warm Octobers and Novembers can mean flight times continuing into late autumn and even into December.