PLEASE READ THIS FIRST – if you share any Southern migrant hawker sightings  from Wat Tyler CP please link/post the text in bold on this link
Can everyone please keep to the paths and boardwalks and avoid trampling any surrounding pond vegetation, as the park is an SSSI.  If similar trampling/damage is caused in this year as was in 2013 it has been decided that news of any future rarity will not be reported from the park.  Please see the more detailed text in the link

Had a quick visit for all of 10 minutes at 12 today and saw nothing.  Apparently there was one perched high up in the hawthorn bushes on the left of the ramp most the morning, so thats a spot worth checking.

Was cloudy with breaks of sun with much reduced wind today, with the odd gust of stronger wind. Observing at about 2pm, the 1 male SMH seemed to be flying around when the sun came out and perching up or disappearing out of sight when the sun went in (typical behaviour for the species, but not a strict rule). The sun dissappearing behind cloud seemed to put it off flying more than the previous two days, possibly due to the stronger wind was putting it off perching, as it was observed a few times trying to land and being pushed off by the wind swaying its perch too much.  Today I saw one perch at least 2 times, but when the sun came out it was whizzing around and not hovering.

With my lunch break ending I was about to head back to work when I noticed a big patch of clear sky near the sun.  This brought out the southern migrant hawker, which I hadn’t seen for a good 10/20mins and it then tussled with another male, before one of them landed it a spot with a clear background and the sun was out!  I crept closer taking shots as I went and got one of, if not my best ever shot. 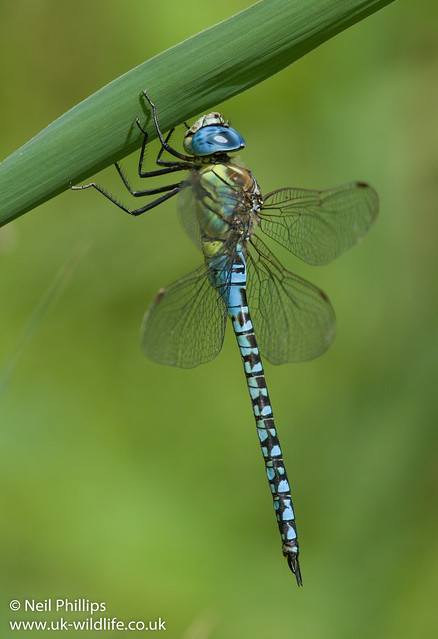 There have been a number sightings including exuviae found at another site (I’ll check its Ok to say exactly where), a male was photographed in Hockley Woods last weekend and last week 1 female turned up in turned up in Lancashire and a Southern emerald damselfly has turned up too in Gunners Park, though sadly not in a publicly accessible area (yet!), so keep your eyes peeled if you are out and about in suitable habitat!